Written and directed by Ajitpal Singh, the short film was among the 37 shorts selected in the Children’s and Youth Film Competition. Known as the largest and world’s oldest running short film festival, Oberhausen received a total number of 7311 submissions from 140 countries this year.

Talking about winning the Special Mention, an elated Ajitpal Singh says, “We feel extremely honored that our short film, Rammat-Gammat is awarded with the ‘Special Mention of the International Children’s Film Competition’ at the prestigious 64th International Short Film Festival Oberhausen. We are grateful to Drishyam Films and Accord Equips.”

He further adds, “What makes it special is the fact that the jury consists children, which means it came from a place of innocence and pure emotions. It means a lot for me that film is touching everyone’s heart irrespective of their age and nationalities.” 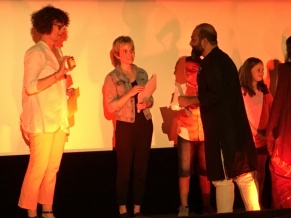 Produced by Drishyam Films, Rammat-Gammat is a moving a tale of two best friends, young boys in rural Gujarat – the son of a lower caste thief and the son of an upper caste village head and their mutual love for football. Their friendship is stretched to the breaking point when one of them is gifted a pair of golden yellow football studs, which will take him away from his friend and out of the village. It’s a simple story of complex characters.

The 18 minutes narrative short film introduces Shivam Math and Yash Patel, two young boys who hail from Gujarat and are real-life football players who have represented their cities at a state level. The film also features Swati Das (Hindi Medium, Bombay Talkies) in a significant role.

Known as world’s oldest running short film festival and “short film mecca” for the sheer reputation among the filmmakers and industry for its bold and high quality short films and a thriving short film market, Oberhausen is credited to discover the works of some of legendary filmmakers like Wim Wenders, Roman Polanski, Martin Scorsese, Werner Herzog, Andrea Arnold to name a few. Among the Indian filmmakers, Ritesh Batra’s short, Café Regular, Cairo (2011) and Amit Dutta’s shorts Keshkambli (2003) and Kramasha (2007) were screened at the prestigious short film festival.

“Short film is a great first step for a budding filmmaker. That’s how I made my beginnings and Oberhausen was an important step on my path to become a Director.” Roman Polanski

“I smoked my first cigarette here. For years, I saw every single film at the Westdeutsche Kurzfilmtage, looking forward to those days in Oberhausen every year. These events were important for me, for my decision to become a filmmaker.” Wim Wenders

Ajitpal Singh was an 8 years old boy when his father ran a cinema hall. After studying chemistry, learning theatre and photography, he chose filmmaking as his calling. He was selected for Sundance’s India Screenwriter’s Lab in 2012. He was the youngest member of Indian delegation at Munich Film Festival 2009, selected by Goethe Institute. He was also selected for 2007 Berlinale Talent Campus’s New Delhi edition. Ajitpal Singh has worked as an Associate Director For Gurgaon (2016) and dialogue writer for Once Again (2017). He has also worked as a researcher for 16 German documentary films in India. Currently, he is writing two international co-production projects.

A company born out of love for cinema, Drishyam Films aims to build a platform for unique voices of Indian independent cinema and create global content with rich Indian. Their international award-winning films include Ankhon Dekhi, Masaan, Dhanak, Waiting, Umrika, Rukh , Kadvi Hawa and Newton (which was India’s official entry to the Oscars 2018). Drishyam Films had partnered with the Sundance Institute, USA to organize a Screenwriters’ lab for Indian writers for two successive years. They have also set up a VFX studio specializing in post-production and visual effects for feature films and commercials.