The poster has a text written in Devnagari that reads, ‘Bairi beimaan, baaghi saavdhan!’

Ashutosh Rana on sets of Sonchiriya 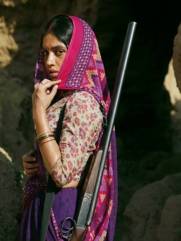 The film is based on the topic of dacoits in Chambal. Starring an ensemble cast, ‘Sonchiriya’ will see Sushant Singh Rajput, Bhumi Pednekar, Manoj Bajpayee Ranvir Shorey and Ashutosh Rana in pivotal roles.

Directed by Abhishek Chaubey and produced by Ronnie Screwvala under the banner of RSVP, Sonchiriya is all set to release on 8th February, 2019.