In the changing face of power and representation in Hollywood, as has been made evident several times in the Oscar and Golden Globe ceremonies, actors of various creed and colour are strongly emerging as mainstream players across film and TV.

Actor Prashantt Guptha has been cast as the lead in possibly one of the first Christmas movies that will star an ethnic actor. Produced by Los Angeles based Mulberry Films and directed by New Yorker Dani Tenenbaum, the film is called A New Christmas.

Says Dani Tenenbaum about his Indian lead actor, “Prashantt’s dedication, professionalism, precision, vision, and attention to details made me understand from the beginning that I’m working with a pro who takes his work very seriously.”

Head of Mulberry Films Rashaana Shah further added that “Prashantt has the best of both worlds. A New Yorker with a penchant for Bollywood, He can look rich, poor, a badass, intellectual, street romeo anything.” 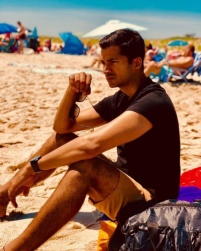 Though originally from New York, Prashantt has been living in Mumbai last several years and has played prominent roles in notable Bollywood movies, as the villain opposite Prateik Babbar in Issaq and alongside Sonam Kapoor in Neerja. He has recently shown his singing prowess with the recreation of a Kishore Kumar classic, O Rahi, which has been released by Saregama and garnered over 160,000 views in a month. Last year, his short film TU, directed by Sandeep Chandrra, received much acclaim for its motivational message and Prashantt’s performance as a dual character!