Kriti Sanon who is all set for her first release of the year with Luka Chuppi shared a BTS picture of the song ‘Tu Laung Main Elaichi’ showcasing the actress in a never seen before avatar which is absolutely cute.

The actress took to her Instagram account to share a cute BTS photo of herself from the song ‘Laung Elaichi’ of the film. Kriti looked stunning in a saree in the picture. The actress captioned the post,

Let the child within you always be alive!! No matter how you are dressed 😜😂
Every memory has its own soundtrack.. this one’s from Laung Elaachi ❤️❤️ #Rashmi #LukaChuppi
Clicked by @harjeetsphotography pic.twitter.com/Zxd9rRoNNb

Kriti Sanon can pull off a western or an Indian look easily and the actress looks elegant as she Dons a saree on screen.

Kriti Sanon has a gigantic fan falling across the nation and worldwide as well. Ever since the Luka Chhupi trailer has come out fans are praising Kriti’s small-town character from the film. Before Luka Chhupi Kriti had nailed the small town character in Bareilly Ki Barfi and now Kriti is all set to blow our mind with her new character Rashmi from Luka Chuppi. 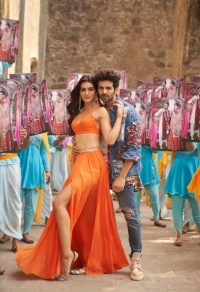 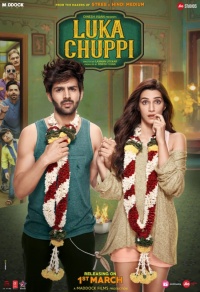 Kriti Sanon has a hectic schedule ahead with her 4 films releasing this year and multiple brand shoots on which the actress is working on simultaneously.

The actress is doing to and fro from Karjat where she is shooting for her next and then to locations of the other projects which Kriti has in her kitty.

Over the years, Kriti is known to portray characters that have resonated with her audience. The actress’ last outing Bareilly Ki Barfi garnered a lot of critical acclaim and love from her viewers.

Only 4 films old, actress Kriti Sanon has an exciting film line up to look forward to with projects like Housefull 4, Luka Chuppi, Panipat and Arjun Patiala. The young actress is leaving no stone unturned to treat her fans with her versatile performances in varied genres of films.